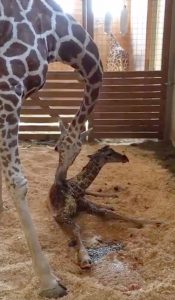 Here are two past Giraffe baby activities for today!

Willow weighed 125 pounds at birth and was 6 feet 1 inch tall.  She will grow to her adult height of around 14 feet tall in only four years! How big would you be if you grew at her rate until you reached adulthood?  In this activity students work with rates, ratios and proportions as the consider the difference in growth rates between humans and giraffes.  You can get the activity going with this super cute video below. 6.RP.1, 6.RP.2, 6.RP.3, 7.RP.3

At about 10:00 am, April 15th, April's calf was born.  Everyone will be talking about it and smiling constantly.