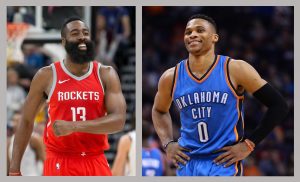 In 2017 Russel Westbrook had one of the most dominating seasons ever, averaging a trip!e double per game.  James Harden lit up the league in 2018 and is considered the favorite for MVP.  Or what about Stephen Curry and his amazing 2015-16 season? Steph was the 2016 NBA MVP winner and his nomination was unanimous.

How do his season stack up against some of the all-time greats?  Who had the greatest NBA season of all time?  Which player contributed the greatest amount of offensive production to their team?  Start out this activity by showing the students the following data (the table shows arguably the best season statistically for each player).

Ask students to consider who had the greatest NBA season ever.  What stats should determine the value of a player?  Have kids brainstorm considering points, assists, rebounds, shooting percentage, steals, blocks and so on.  Are all stats created equal?  Should scoring points count more than rebounds or steals, if so how?  Let students grapple with this, let them come up with some ideas or their own formulas.  Let students share their reasoning, formulas and selection of the greatest season ever.

Then let them go through our more structured lesson as we give weight to the various
elements of a player's stats  to create a model for analyzing the production of these terrific players.  Use our formula or allow students to create their own weighted model to analyze the greatest player ever and be able to calculate how these players rank in their best seasons.  We have provided, arguably, the best season stats for Jordan, Johnson, Bird, O'Neal, Bryant, James and Curry.  Consider having your students research other great players, past or present.  Stats for NBA players can be found at basketball-reference.com.  At the end of this lesson we ask students to tweak our formula (or their own) so that it is more favorable for their favorite player(s).

Students model with math and work with order of operations, expressions, formulas and the distributive property as they consider different ways to write or compute with our formula.  How many different ways might your students write the expression:

This is also an excellent time to introduce formula use in Excel to your classes.  Enjoy!

For members we have an editable Word doc, an Excel file, and solutions.

Special Thanks to John Tague, [ @jtague252 & http://lefthandededucator.blogspot.com/ ] for his help and feedback prior to the post of this activity!