The New Horizon space probe was launched from Cape Canaveral on January 19, 2006. It has now come close to Pluto and has sent its first close-up images back to Earth. 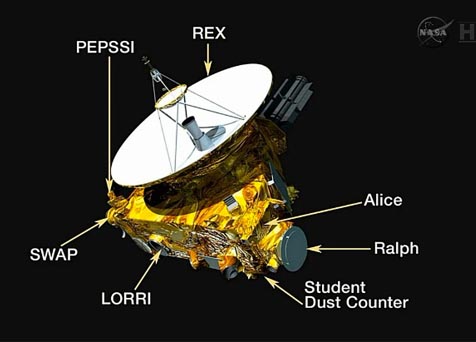 Clicking on this image will take you to the NASA site where the instruments are defined. 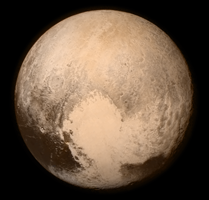 Clicking on this image will show a new larger picture in a new window.

From the Hubble telescope we could see only this amount of clarity of Pluto.

This is the entire surface of the dwarf planet Pluto, as constructed from multiple NASA Hubble Space Telescope photographs taken from 2002 to 2003.

On July 14, 2015, the New Horizons probe will be very close to Pluto (7,750 miles or 12,500 kilometers). Scientists have been waiting since the New Horizons' launch in 2006 to be able to see Pluto close-up and in detail for the very first time.

1.  How long has the New Horizons space probe taken to travel to Pluto?

The news agencies have reported that New Horizons' trip involved a distance of 3 billion miles (5 billion kilometers) from where the rocket began on Earth to where Pluto will be situated in mid-July,2015.  The probe wasn't always traveling at its present speed (52,000 mph).  As it passed by Jupiter it used Jupiter's gravity to perform a "gravity assist maneuver" which sling-shotted it out with a significantly increased speed.

2.  On average, what has been New Horizons' speed on its journey to Pluto? You could use scientific notation to help calculate this.)

After taking photographs, testing and measuring the atmosphere and make-up of Pluto and one of its moons, Charon, the probe will hopefully be able to continue on to the Kuiper ice belt. 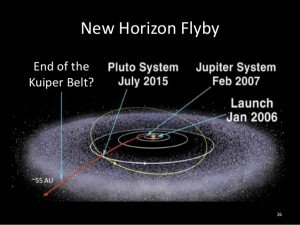 Clicking on this image will show it larger on a new page.

The outer edge of the Kuiper Belt is believed to be at a distance of 50 AUs from the Sun.  Pluto has an average distance from the Sun of 40 AUs.

3.  If the spacecraft isn't destroyed by colliding with an object, how long do you expect that it will take to reach the outside rim of the Kuiper ice belt?  Do you have to know how many miles or kilometers an AU is to figure this out?

For members we have calculations for these 3 questions and some more information about the instruments on board the New Horizon probe.

This activity gives a great opportunity to connect math & science.  Students can work with rate conversions with standard or scientific notation.  Students can model & solve these questions with functions.

What other questions do you have?  At that speed how long would it take you to travel across the U.S.?  Or around the world?