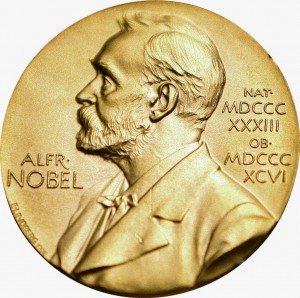 Clicking on this image will open it larger in a new window.

This is the medal that is given to the Nobel prize winners.  Check it out. (Teachers, you could get into Roman numerals right here.)       LittleRomanNumeralLesson.pdf

The Nobel Prizes have just been awarded.  Alfred Nobel was a chemist, engineer, inventor, and businessman.  He left most of his fortune to endow 5 prizes for "those who, during the preceding year, have conferred the greatest benefit on mankind" in physics, chemistry, physiology or medicine, literature and peace.

Take a look at the monetary amount that Alfred Nobel bequeathed and evaluate the present day worth of that gift from Krona to U.S. dollars and the value of his gift today.

← Kilauea’s lava flow
How much should you spend on this sale? →