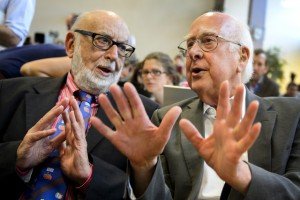 François Englert and Peter W. Higgs were jointly awarded the Nobel Prize in Physics 2013 for the theory of how particles acquire mass. In 1964, they proposed the theory independently of each other. In 2012, their ideas were confirmed by the discovery of the Higgs particle at the CERN laboratory outside Geneva in Switzerland.

After almost 50 years of looking for the subatomic particle that could validate our standard model of physics, two teams working at the Large Hedron Collider (LHC) have both concluded the existance of the particle.

Familiarize your students with the incredible size of the LHC, the requirements of science to show proof with two different and independant experiments, let them begin to understand standard deviation and appreciate the immensity of the Higgs field proof.

Below is a great Nova video that introduces the notion of the Higgs field and the experiments that have been ongoing to trace it’s existance.

Below is an awesome rap by Kate McAlpine and some of the CERN staff that will summarize what your students have learned.  You will all love this !

← Do teams that spend a lot win a lot?
How much should a World Series commercial cost? →