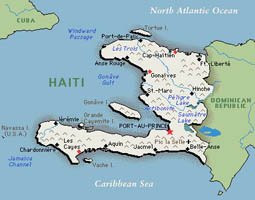 On January 12th of this year, there was a tremendous, 7.0 magnitude, earthquake in Haiti. Hundreds of thousands of people were killed or injured and a million people became homeless. Then on November 5th, Hurricane Thomas hit Haiti. Huge amounts of rain caused flooding in the tent cities where earthquake survivors were living. Now cholera is devastating the population.

This is a tragic series of events to happen to an already poor and impoverished country. We've gathered some of the cholera data and offered it as a way of looking at the rate and spread of the disease in Haiti. This is a difficult subject and discretion is probably necessary in assigning this.

We also have an investigation on the Richter scale.